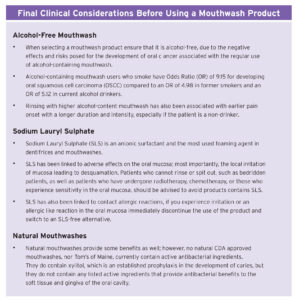 CONCLUSION
Although 90% of used mouthwash products in the US contain at least one active ingredient, 60% of the U.S population used mouthwash weekly, and 33% daily.6 This garners a need for patient education and a more organized approach to the application of these products by both the patients and dental providers. Consumers should stop viewing mouthwashes as cosmetic products, but rather the drugs which they are. Before using any mouthwash, one should always read the instructions and ingredient list, and if in doubt always ask a dental professional, especially in order to best manage specific oral health conditions and concerns.6,12
Oral Health welcomes this original article.
References
About the Author

Mr. Frank Poppolo Deus holds a Bachelor of Science in Biochemistry and is a third-year dental student at the faculty of Dentistry, University of Toronto.

Dr. Aviv Ouanounou is an assistant professor of Pharmacology & Preventive Dentistry at the Faculty of Dentistry, University of Toronto, and a clinical instructor and Treatment Plan Coordinator in the clinics. He is the recipient of the 2014-2015 Dr. Bruce Hord Master Teacher Award for excellence in teaching and the 2018-2019 National W.W. Wood Teaching Award for Excellence in Dental Education. He is a Fellow of the International College of Dentists, American College of Dentists and Pierre Fouchard Academy. Dr. Ouanounou maintains a private practice in Toronto and is the corresponding author for this article. Reach him at aviv.ouanounou@dentistry.utoronto.ca.
Campbell River, Comox, Ladysmith – Vancouver Island, BC
Burlington, ON
Durham Region, ON
North York – Toronto, ON
Across Canada
across Canada
British Columbia, Ontario and Quebec
across Canada
01/03/2023
12/23/2022
12/21/2022
2023 Newcom Media Inc. All Rights Reserved.
We use cookies to make your website experience better. By accepting this notice and continuing to browse our website you confirm you accept our Terms of Use & Privacy Policy.
read more >>